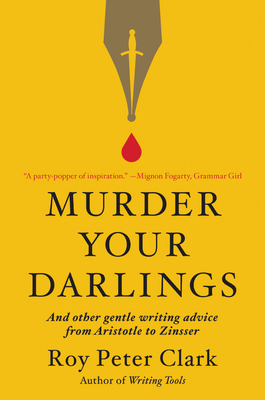 Here is the sixth in a neatly designed set of reference and inspirational volumes by Roy Peter Clark. He is an accomplished writer on writing and what a catchy title—thanks to Sir Arthur Quiller-Couch’s famous instruction to delete your most-show-off-y-ish bits.

Here marketability doesn’t equate with superficiality. Clark summarizes and lists some fine resources herein. And I’m more likely to seek out Ursula K. LeGuin’s writing advice than Aristotle’s, so I was content to read Clark’s condensed version of Poetics. (LeGuin is here too though: several of the resources I’ve chatted about here also matter to Clark.)

When Clark was struggling to condense his list of favourite resources, he came to organize them into sections which remain in the final manuscript as six parts: Language and Craft; Voice and Style; Confidence and Identity; Storyteling and Character; Rhetoric and Audience; and Mission and Purpose. And although this book is ideal for a beginning or emerging writer, more experienced writers who are grappling with a specific aspect of finishing a manuscript might find it worthwhile to browse that relevant section to see if something sparks.

Each segment begins with a “Toolbox” and ends with a set of “Lessons”. The Toolbox succinctly reworks the resource’s key idea (like Anne Lamott’s “shitty first drafts”, for instance) and the Lessons offer a handful of tips directly related to that premise. So if it’s not enough to condense an entire book into a half dozen pages, you can contemplate its essence, captured in a dozen lines or so.

For the self-taught writer, the bibliography alone would be worth the price of this volume. Although only about a quarter of Clark’s selections are works by women writers, most are classic rather than contemporary, and nearly all are Anglo-American.

Having already read more than half of the works that Clark discusses, this is a book I’m content to borrow from the library rather than house on my own shelves. Nonetheless, I did enjoy reading through these chapters, one – sometimes two – each day. Rather as I imagine some people might leaf through a volume of prayer in the early morning or late evening, as a reminder of basic tenets of storytelling and rhetoric. There’s an air of humility coupled with enthusiasm and I enjoy that.