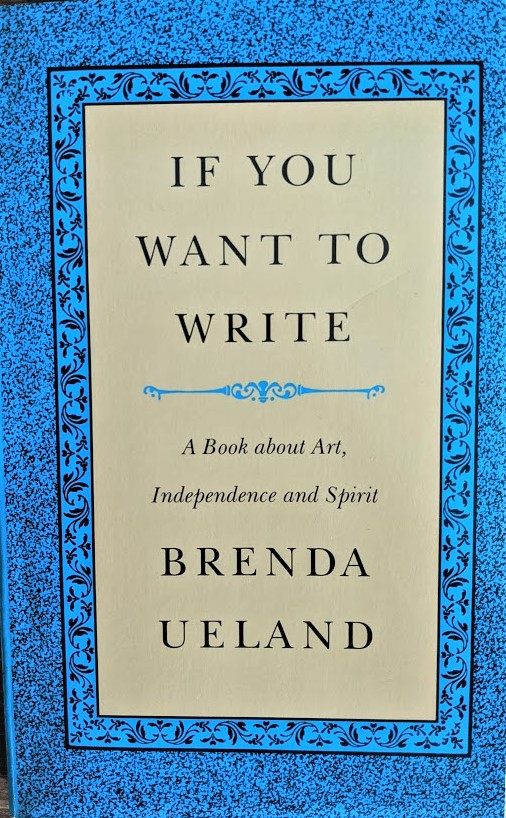 Because my copy of this is a reprint from the 1980s, purchased around the same time as Anne Lamott’s Bird by Bird (1994), I expected something different. In truth, the first couple of times I started to read, I managed only a few pages and set Ueland aside.

Had I understood that it was first published in 1938, I would have adjusted my expectations. In spirit, it falls at the intersection of Dorothea Brande’s Becoming a Writer (1934) and John Gardner’s On Becoming a Novelist (1983). Ueland’s style is removed and direct like Gardner’s but she shares specific and personal details like Brande does.

Her advice is startlingly relevant. That plain-speech which seemed over-simplified and off-putting on my first attempts was refreshing when I revisited it.

At first glance, one might mistake her as being too idealistic. She says, for instance:

But she is not overlooking other basic needs. She is only asking that writers follow that principle for “some part of every day”. Every day in every way? That would be too much. But even for a few moments, anyone can strive for that.

Her directions are simple: “With every sentence you write, you have learned something. It has done you good.”

One element that I appreciated was her spirit of inclusiveness. This, from a footnote, broadens her audience substantially:

“Whenever I say ‘writing’ in this book I also mean anything that you love and want to do or to make, It may be a six-act tragedy in blank verse. It may be dressmaking or acrobatics, or inventing a new system of double entry book-keeping. But you must be sure that your imagination and love are behind it, that you are not working just from grim resolution, i.e. to make money or impress people.”

I mean, come on: acrobatics is great fun to include here, right? (Not only because many writers lead such sedentary lives that a daily walk can be construed as serious exercise.) But what an act of generosity to afford creativity even in areas which are often presented as the antithesis of creative fields, like accounting. Not everyone is willing to acknowledge that creativity can take many forms.

Ueland’s approach is grounded and humble. She writes: “I think there is something necessary and life-giving about ‘creative work’ (forgive the term).” In a footnote, she writes: “To say the word ‘creative’ has always embarrassed me. So many unctuous people have over-used it. But I have to use it. It is what I mean.”

If You Want to Write is also the source of one of my favourite quotes about writing: “So you see the imagination needs moodling, –long, inefficient, happy idling, dawdling and puttering.”

When I first began to write, I had realized how essential this kind of moodling was to my work, but when I tried to describe it to other people it sounded too much like procrastination. Which it could be, if one never got around to writing writing.

Seeing the idea in print validated my experience and I still recall her words when I find myself forcing strings of words together, frustrated but unable to set aside the work, and eventually I get to moodling. “So never bother to grind. Just try to understand something for the time. If you don’t, go on to the next. For if you understand the second or third thing, you will suddenly understand the first.”

She is also a great reader. She loves and admires the Russian novelists for their truthfulness and lack of pretense, especially Chekhov, Tolstoi and Dostoevsky (also Ibsen, Blake, Goethe, Mann) but not Mencken, nor Lawrence, nor Lewis.

And she is something of a philosopher. Asking tough questions. Leaving us to answer them. “But how to single out your true self, when we are all so many selves? Yes. I know that is hard.” And, “…only by writing and by long, patient, serious work will you find your true self.”

As well as an egalitarian type of feminist: “In fact that is why the lives of most women are so vaguely unsatisfactory. They are always doing secondary and menial things (that do not require all their gifts and ability) for others and never anything for themselves. […] But if women once learn to be something themselves, that the only way to teach is to be fine and shining examples, we will have in one generation the most remarkable and glorious children.”

One could sit and read this entire volume easily in a single afternoon. But even if you do not want to take that time, there are twelve points at the end of the book which she makes to summarize its contents. I especially love number 5: “Don’t be afraid of writing bad stories.” Her suggestion? To discover what is wrong with a story write two new ones and then go back to it.”

Brenda Ueland’s If You Want to Write: A Book about Art, Independence and Spirit. 1938. Saint Paul, MN: Graywolf Press, 1987.