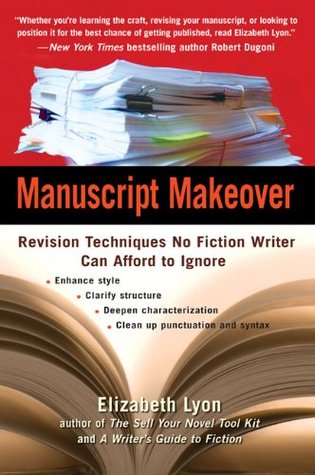 Some of my favourite resources are devoted to revision, like Sandra Scofield’s The Last Draft: A Novelist’s Guide to Revision.

Nonetheless, at first glance this volume would not have made it into my stack: it’s ten years old now and the stock photo cover doesn’t do it any favours. (It was recommended as a resource in the back of another book on writing, one which was useful enough to inspire a bout of list-making.)

Elizabeth Lyon’s book is, however, still worth a look. Yes, it has a chapter on “marketing”, which doesn’t once refer to social media. And it extolls the power of the digital cut-and-paste, a feature most contemporary writers no longer admire, simply take for granted. And it refers to the “newcomer springing from authors of two generations, Gen X and the Millennial Generation (1977-1998)”, the “graphic novel”.

Each chapter begins with a brief discussion of options, which includes a summary of the upcoming material and suggestions for engaging with related topics considered elsewhere. At the end of each chapter is a checklist (literally, although all the boxes are already checked!) which summarizes the content and the potential solutions, in statements and bullet-points.

The material is elementary and Lyon begins with overarching issues and moves into more intricate matters in later chapters. She suggests, for instance, beginning with a consideration of basic structure, before moving into detailed revision work.

There are five stages of structure in her model: “1. A character has a problem. 2. Complications arise and conflict intensifies. 3. Crises culminate in a climax. 4. The problem is resolved. 5. The hero or heroine learns something about self or life.”

This feels a little like high-school English class, but just a couple of chapters later, there is more detailed information. For instance, the discussion of the importance of movement and suspense. These elements are created, Lyon notes, by: “actions, outer and inner”, “raising questions”, reactions, emotions, reversals and subtext.

Taking two or three pages to explore each, and using examples from well-known stories (like Gary Paulsen’s Hatchet and Philip Pullman’s The Golden Compass), she takes things to sentence-level. (No spoiler warnings, but most examples are only the length of a paragraph.)

She selects areas of emphasis based on a couple of decades working as an independent editor and the bulk of her work centres on characterization (which fits with my experience – investing time in characters is never fruitless). She writes: “Almost every novel that is finished in the eyes of the writer still needs work on characterization.”

She also devotes time to the scenic level: “What I have observed in many published novels is that scenes tend to be more fully developed and longer at the beginning (minus the hook, which may be a very short chapter one) than later when all of the setup is done and the characters known.” The additional work on characterization fuels this developmental work.

For beginning and intermediate writers, this resource presents solid suggestions and philosophies about storytelling. For advanced writers, both Susan Bell’s The Artful Edit and the Sandra Scofield linked above spend less time on orienting the reader, fewer pages defining basic terms and outlining theories, and more time analyzing and querying.

This is still good stuff for beginning and intermediate writers.