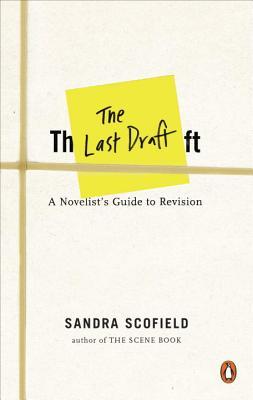 If you’re not prepared to invest as much time with your revisions as you have invested with your draft to date, this is probably not the book for you.

“The thing is, you’ve put in a lot of time developing your story into a workable draft, so this isn’t the time to hurry. Be open to discovery, chagrin, exuberance, fatigue. Be willing to take the time to think.”

If you’re looking for an exhaustive primer on revision and polishing, part-commentary and part-workbook, The Last Draft will fit the bill.

“Write fifty scenarios if you need to. Draw cartoons. (Seriously.) Write another draft. I can think of a lot of writers who took five, six, or more years to get their books written – and published.”

The introduction and the conclusion are filled with all the kinds of things one comes to expect in books about writing.

Some inspirational: “Write what you love; love writing it; hope for a readership; appreciate every reader.”

Some practical: “Line to line. Paragraph to paragraph. Page to page. All the way to the end.”

In between, however, is a wealth of detailed and considered advice for writers who seek not to simply complete a finished draft but hone their skill.

Throughout the book are exercises which could be completed as discovered but the commentary is extensive so the exercises are accompaniment rather than disruptions (I read straight through and then returned to select exercises for areas in the draft which I had already identified as needing extra attention).

Important concepts are explained clearly and immediately. For instance, the distinction between exposition and interiority.

“Exposition should be interesting in its own right, even as it amplifies prior or later action. It is always clarifying, never obfuscating. Its appearance should never so interrupt action that dramatic engagement is lost.
Interiority should deepen the engagement of reader with character. Its purpose is not primarily expository; it should not be necessary to the action, though it is usually triggered by action. It is enriching and emotional. When it explores a character’s emotional conflict, it adds to dramatic tension. And it brings the reader into deep empathy.”

There is a pleasing balance between commentary and examples, which showcase recent literary novels and stories (with the occasional example from the later decades of the 20th century), usually via summary rather than quotations.

Some craft concepts are familiar, included in books which are aimed at beginning writers, but The Last Draft nudges things a little further, inviting deeper contemplation.

For instance, a discussion of the struggle a protagonist faces  is common in books about the writer’s craft, but sometimes in superficial terms (which may be appropriate in an introductory volume); here, the matter of struggle is afforded a less tangible dimension.

“There should be two levels of struggle:
1. The need for something concrete that the protagonist is fighting to get (such as safe haven, a scholarship at ballet school, or the love of a partner),
2. The urgent desire to be better.”

Similarly, Scofield presses beyond the usual talk of summary and description in “What is the story?” by including this element in a list of items to consider: “State the vision or intention of your novel.”

Certainly one could complete the process of revision without considering this question, but an understanding of the answer would inform all the other elements of revision as well.

“So one way to think of vision in the novel is to ask yourself:
How should people treat one another?
How should the earth’s goods be shared?
What responsibilities do families (or strangers) have for one another?
What happens when such ‘goodnesses’ are violated?
What do you think an individual is capable of under great stress?
One way or another, you are inevitably making a case for how life works, so you might as well be conscious of what you are doing.”

Text-boxes summarize the key points Scofield will explore, and this framework makes it possible to use these lists to direct your attention to specific elements after a read-through.

For instance, the list under “How do I revise?” includes “5. Develop a scheme of lines of threads”, and several pages later that is considered in detail. (I was calling this element of my draft ‘patterning’, and Scofield’s series of statements offered another perspective on the element’s development and importance.)

“Lines of Threads
5. Develop a scheme of lines of threads.
What are ‘threads’?
They are lines of action and meaning that run through the story.
But didn’t we just do that with plot and subplots?
Well, yes, but there are other ways to think of them.
What questions are raised that the story answers?
What motifs throughout the manuscript enrich meaning?
What are the major emotional issues in the story interiority?
What elements of backstory illuminate the story?
How does setting strengthen story?”

Granular and methodical, inquisitive and exuberant, Sandra Scofield’s The Last Draft is a valuable resource. (It also contains a useful list of other books on craft, most of which were new-to-me, even though I have nearly 600 books on the subject on my shelves.)