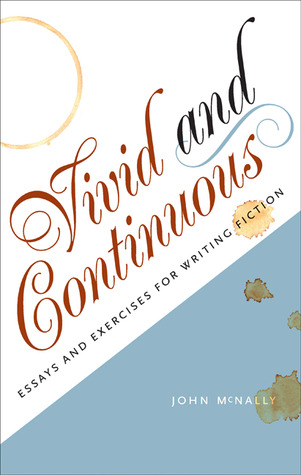 A writing book that begins with an epigraph from John Gardner? That bodes well for me. Gardner’s was one of the first books I read on craft and it has stood up well to rereading.

It contains some very broad advice. Such as: “no writer can please everyone”. And a general reminder that writers need to be very good manipulators. (Of text, yes, but also their own doubts and fears.)

He offers specific advice too. For instance, he considers the twenty most common craft-related issues that lessen immediacy for a reader. The first is Dialogue Tags that Yell for Attention; the last is Searching for Substitute Words instead of using Commonplace ones (and, in between, Backstory and Simile-metaphor Overload).

John McNally has read over a million pages of fiction written by beginning writers, and he has edited theme-based anthologies. He is well situated to identify the common default stories – those ubiquitous and problematic tales – even when they vary regionally (for instance, the plethora of snowboarding stories written in Colorado).

He can warn against the overused and make suggestions to transcend. Which is what he does when it comes to specific structural and mechanical issues as well, as in the chapter on  Imitative Fallacy. Here he begins with a definition and ends with examples of how Flowers for Algernon mitigates the common problems associated with Imitative Fallacy and also explains Keyes’ techniques.

McNally relies upon familiar stories and full-length works to demonstrate a variety of techniques and approaches. In fact, there are ten pages filled with tiny print at the end of the volume, devoted to  Further Reading.

This includes his Works Cited but also an extended reference list, which includes biographies and collections of letters, story collections and novels. Although there are not many representatives of either young writers or genre writers, otherwise the list is representative of a wide variety of literary prose.; he recommends writers from Bradbury to Gaitskill, from Gowdy to Hurston.

At the end of each chapter are a few exercises, which are designed to work well for both individuals and groups. (It’s frustrating when exercises are designed only for a classroom setting: surely the majority of readers are alone in a room with a piece of paper.) These are general enough to be inspiring but specific enough to feel fresh and repeatable.

“There is, when all is said and done, only that which works for you.”

“I’ve been thinking a lot about humility recently because, as a creative writing professor, I see less and less of it every year, and it depresses me.”

McNally, John. Vivid & Continuous: Essays and Exercises for Writing Fiction (U of Iowa, 2013)