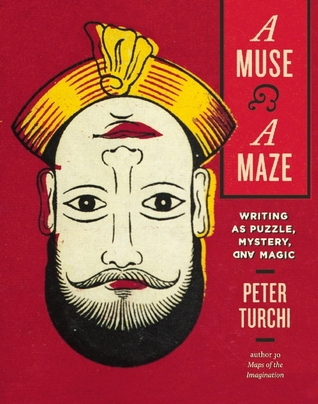 This I began to read while walking home from the library. The construction on Eglinton creates pedestrian detours which take me off the straightaway, force me to slow my pace even more, travel alleyways rather than sidewalks.

Peter Turchi’s book feels like exactly the right writing book for me right now, as I fuss with the details in a complicated structure in a manuscipt I’ve been fussing with for countless revisions, constructing detours around the page to play with discovery and mystery.

It reassures me to learn that Jennifer Egan rewrote parts of A Visit from the Goon Squad 79 or 80 times. (Although now I wonder if I should be counting drafts, wonder what made her decide to count. Or whether it was an application’s relentless habit instead, electronic memory.)

This I learned from a NYT interview, but it fits, because Egan’s novel proves Turchi’s point, that some novelists are puzzle makers.  Actually, ALL writers, he suggests.

“Our wariness of neat solutions, our desire to grapple with deeper mysteries, is what draws us to serious fiction,” he writes.

A Muse and A Maze is a delight. Not only does it actually include puzzles (of all sorts: even the cover!) but puzzles which are designed to appeal specifically to bookish people.

There are solutions in the back, except for one puzzle which was presented as a contest for readers to solve, with directions to the author’s website instead. A logic puzzle about writers, an acrostic with bookish clues, Will Shortz’s favourite word game, magic squares, riddles: they are designed to intrigue.

It also contains many inspiring quotes which support his theory of writers-as-puzzle-makers and many suggestions for your TBR list. It’s fitting that he recommends so many books: “Even the books we don’t choose to spend time with tell us something about what we value.”

Also included are many carefully selected images, from self-portraits of artists which contain only objects to photographs and prints which complement the text. He even includes a set of tangram pictures and a template on the back page so you can make your own and play at assembling the pieces into the shapes shown.

There are longer musings upon concepts which underpin his theory (the bits on mystery and labyrinths were especially interesting to me) with an abundance of illustrations and references. Even if these weren’t elements of interest to you before-hand, Turchi makes them seem fascinating.

The quotes included from other writers’ musings upon the craft of writing vary from general thoughts on construction to quotes which more directly reflect his theory.

John Le Carre writes: “Creating order from chaos is the innermost room of a writer’s desire.” Ross MacDonald writes: “We reshape ourselves as we write.” These ideas carry a broad appeal; surely any writer can find something to relate to here.

Tim O’Brien writes: “A satisfying plot, I believe, involves not a diminution of mystery but rather a fundamental enlargement.” And Jan Kjaerstad writes: “You know…all of this could be rearranged to form quite a different story.” These ideas may have a more specific appeal, seeming to speak of a particular kind of story and particular ideas about how it might be told.

Further into the work, thoughts by other writers are more complex, even more specific in terms of what motivates their storytelling and how structure and theme dance in some literary fiction.

James Salter writes: “Most of the details…have long since been transformed to rearranged to bring others of them forward. Some, in fact, are obviously counterfeit; they are no less important…. The myriad past, it enters us and disappears. Except that within it, somewhere, like diamonds, exist the fragments that refuse to be consumed. Sifting through, if one dares, and collecting them, one discovers the true design.”

Michael Ondaatje writes: “It’s like a villanelle, this inclination of going back to events in our past, the way the villanelle’s form refuses to move forward in linear development, circling instead at those familiar moments of emotion…. We live with those retrievals from childhood that coalesce and echo throughout our lives, the way shattered pieces of glass in kaleidoscope reappear in new forms…. We live permanently in the recurrence of our own stories, whatever story we tell.”

I’m not sure that all writers are puzzle makers. But I can think of specific books which read like puzzles to me and they are usually amongst my favourites. While not every writer will be drawn to Peter Turchi’s meditation, those who find the idea of it immediately intriguing will likely find the book thrilling.

Turchi, Peter A Muse & A Maze: Writing as Puzzle, Mystery and Magic (Trinity U Press, 2014)