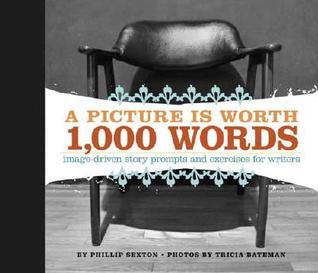 Often, I’ve heard about a book from Writer’s Digest, gotten my hopes up, and been disappointed in it. I had a contrasting experience with this book; I approached it cautiously (thanks to countless photo-prompts that haven’t inspired me in the least), but I was ultimately quite pleased.

The first book that Phillip Sexton gives thanks for is Jack Heffron’s The Writer’s Idea Book, one of the few Writer’s Digest Books I’ve purchased. (Most, but not all, of the books listed in the Further Reading section are also Writer’s Digest Publications, but I suppose that’s to be expected.) Not surprisingly, the two complement each other: Heffron’s is decidedly text-based and Sexton’s clearly image-based.

Wondering what sets this volume apart from other books like it, which are also marketed to writers in search of exercises to get the pen moving or, more concretely, ideas for stories and novels if those are lacking? Not a lot. There are many similar resources and although they do date easily (particularly when image-based), the concept remains the same. So what ultimately sets this one apart is Phillip Sexton’s voice.

There’s not a lot of it, but beyond the introduction and afterword, each photograph is accompanied by a paragraph or two, which often include a snippet of another writer’s opinion on the subject but fundamentally rely upon Sexton’s exposition. And, if you like his approach, you’ll probably appreciate the commentary that accompanies each image.

Sexton is obviously a reader and instinctively recognizes storytelling inspiration in abundance (story ideas are everywhere, not just in prompt books or pet subjects). Not only does he refer to Shakespeare, Mark Haddon, Tom Robbins and Ann Hood, but also to Stephen King, J.R.R. Tolkien, and Dan Brown, and also to well-known scripts for film and television (inspiration also lies in other storytellers’ works, and not only works published by Writer’s Digest).

Ultimately the exercises will repeat others that you’ve seen in other similar books, but beyond Phillip Sexton’s approach, A Picture is Worth 1,000 Words has Tricia Bateman’s photographs to recommend it. Sometimes the images in similar books feel a little contrived, but these photographs are unusual; sometimes they even have blurry bits (perfect for imagining stories into those foggy bits) and there are tonnes of ideas lurking there.

Phillip Sexton’s A Picture is Worth 1,000 Words with Photos by Tricia Bateman (Writer’s Digest Books, 2006)