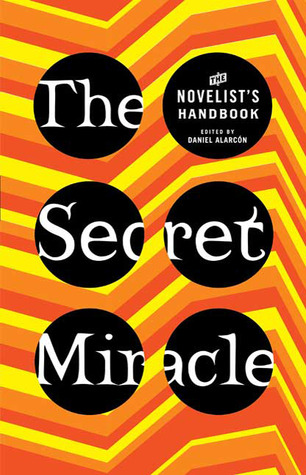 Imagine three-hour-long sessions in which a panel of writers is asked a series of questions about the writing process in front of an audience of 50.

Now imagine that bits and pieces of those sessions have been reassembled in an edited form, arranged by topic, with the responses of 54 writers.

Or, rather than imagining that, you can pick up a copy of The Secret Miracle.

Here are the writers who have appeared in sessions at 826 National (yes, proceeds from this book benefit youth literacy):

It’s quite a collection of writers, discussing the following topics:

Those who are looking for a prescriptive text will be disappointed. As the editor explains, “This book is not a how-to. No such book exists because it cannot be written.”

That’s actually one of the reasons that I so enjoyed this collection. No sooner had one writer said “Of course I write with an outline — a very detailed one, in fact — and I can’t imagine ever writing without one” than another said “Outline, schmoutline: I can’t imagine anything more stifling creatively”. It certainly emphasizes the precept that what works for one writer does not work for the next, that there is no “silver bullet” for crafting a novel. “They, like all of us, have good days, bad days, and days where it is more useful to sit quietly and read, to let the writing itself wait.”

Instead, the editor’s intent is that this volume “inspires, consoles, frightens, prods, angers, and excites many of you who pick it up.” It accomplished all of that in my books. Well, except for the anger: nothing in here made me angry. I wonder what did rouse that emotion for other readers.

Another hope of the editor is that the volume leads readers “to the work of the fine novelists who have given so generously of their time and wisdom to make this book a reality, and if not to their work, then to that of the many writers they have recommended”; I definitely added several names to my TBR list.

One thing that I found especially interesting is that I expected to find some authors’ comments particularly useful and had no expectations at all of the authors whose works were unfamiliar to me, but in fact I found that some of my favourite authors had little to say that made me want to note their passages, whereas I found myself constantly marking passages by some authors whose works I hadn’t read (say, Aleksandar Hemon, Chris Abani, Ann Cummins).