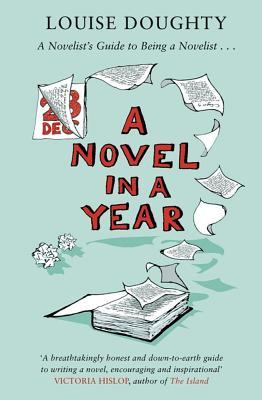 A Novel in a Year gathers together a series of articles previously published over the space of a year although I read the chapters a few at a time which worked just fine as a reader, although if I’d been reading along as a writer, I would have had to set it aside more frequently to do my homework.

Doughty’s tone is one that I warm to immediately. She offers ideas without a sense that she alone possesses a wisdom about storytelling that nobody else has. And she freely admits that although she does have some good ideas, she knows that she doesn’t always practice what she preaches.

“What advice people need in the early stages of their writing depends so much on their level of skill and experience — not to mention personality type — that I wouldn’t dream of being proscriptive. I make no larger claim than this: this book gives you an idea about how I do it, and here are a series of exercises that might help you have a go at it more or less my way.”

There is a slight cheer-leading quality, which might work well for those who endeavour to work along with the exercises: “Forget for a moment the loneliness and fear, the paranoia and financial insecurity, Being a Writer is great fun.” And given that rejection is a vital part of any writer’s life, who’s to say that some encouraging words are not only ‘nice’ but necessary. “Your only concern right now should be to write. Write your book, write it well, then rewrite it even better.”

And it’s not all encouraging chatter by any means. Doughty has some concrete advice. Some of it is very specific, which suits the premise of the book, but some of it is more general.

“Read. Read as if your life depended on it because your life as a novelist does. Read for sheer enjoyment — what sort of books you enjoy reading provides a pretty strong clue as to what sort of book you should be writing. But also learn to read critically. If something that a particular writer is doing rings your bell or gets your goat, why? As a reader, you may favour a certain style or genre; as a critic, you should be an omnivore.”

You should always know more about your characters than you can possibly include in your book.

A plot is not an idea, it is a whole mass of ideas, often in conflict with each other, which are expressed by a series of events. To have enough material for a whole novel, you have to be prepared to look way beyond your original idea, beyond yourself, to give it context and development, and above all to introduce the possibility of change.

I wouldn’t dignify it with the phrase writer’s block. Writer’s sludge is more like it.

There has to be a cast-iron reason for that kind of stuff otherwise you won’t get away with it. Readers aren’t fools.

And sometimes she’s just plain sassy: I like that.

“We could all live perfectly useful lives if we didn’t write novels. Think of the hours we could spend with our families or hoovering the stairs — I’d have awfully clean stairs if I didn’t write books.”

If you’ve seen the dust bunnies that have colonized our stairways at home, you’ll understand why I truly warmed to Doughty’s book.