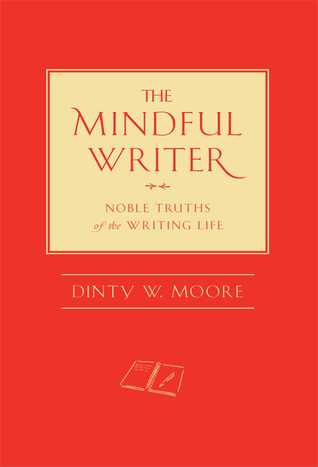 When I was very small, I had a little red hard cover book called The Wisdom of Charlie Brown. A Hallmark publication, it is a little larger than the palm of my hand now; then, it was probably the size of both palms but still smaller than other books. This is the book which came to mind when I first saw Dinty Moore’s smaller-than-usual The Mindful Writer.

There is something inherently appealing about a book this size. If it were not a library book, I would tuck it into the pocket of a heavy coat and contentedly rediscover it each season, and then throughout the season, on the most wintriest of days, enjoying a few pages at a time. Because it is on loan to me, I settled for reading it over a few evenings.

The volume is divided into four parts: “The Writer’s Mind”, “The Writer’s Desk”, “The Writer’s Vision” and “The Writer’s Life”. It begins with a recasting of the Buddhist principles of the Four Noble Truths into “The Four Noble Truths of the Writing Life”. I’m not Buddhist and there are plenty of other not-Buddhists in the book too: the list of authors quoted does include Thich Nhat Hanh (but only once) alongside a long list of writers like Margaret Atwood and Carlos Fuentes, Junot Díaz and Ursula K. Le Guin, stretching across genre and across forms.

Each chapter begins with a quotation and then a page or two (occasionally three) enlarging on the idea therein. Some are more about mindfulness and less about writing. Most directly refer to the art and craft of writing. Whether Joan Baez or Truman Capote, the anecdotes about creativity are versatile but they are not so generalized as to feel like a series of greeting cards.

The quotations from well-known writers are not familiar to me. A couple made me smile (like Auster’s, which apparently makes the author smile too): “That’s about as exciting a life as it is for a writer: You write sentences, and you cross out sentences.” And a couple made me wince (in recognition), like this from Philip Roth: “My page one can end up a year later as page two hundred, if it’s even still around.” (I have enjoyed Paul Auster; I’ve never connected with Philip Roth’s work.)

One that I particularly love is Vita Sackville-West’s quote about preserving moments, even though I’m not entirely sure that the butterfly metaphor works for me if I carry it forward. “It is necessary to write, if the days are not to slip emptily by. How else, indeed, to clap the net over the butterfly of the moment? For the moment passes, it is forgotten; the mood is gone; life itself is gone. That is where the writer scores over his fellows: he catches the changes of his mind on the hop.”

Which is why I appreciate this little volume. It got me thinking about why I write and how I consider the outcome of my work.

It’s good stuff for writers who are concerned with being mindful.