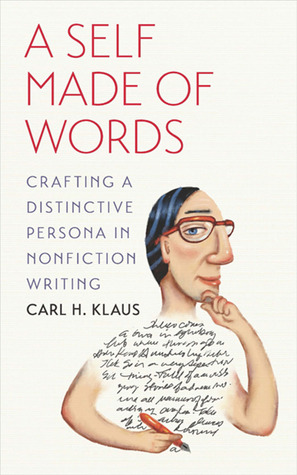 He begins with an epigraph from Virginia Woolf’s “The Modern Essay”: “Never to be yourself, and yet always; that is the problem.”

Which sums up what I most admire and appreciate about this slim volume: the author’s willingness, enthusiasm even, to embrace complications, contradictions even.

It is designed to help you “create an engaging impression, rather than letting your written self take shape haphazardly in a form, style, or voice that might misrepresent you or turn off your readers”.

The book is divided into two parts: the first introduces the concept of a persona and the second considers elements of writing to employ in the process of creating your unique persona.

This structure of divisions repeats and flourishes. Each short chapter has two parts as well: paragraphs alternating between exposition and examples to illustrate that content. The exercise at the end of each section also contains two parts: first, the writing, and second, a reflection on your experience of writing that exercise.

As with all of my favourite writing books, there is a list of recommended reading in the back. This one presents resources under the following headings: “Mental/Spiritual Guidance”, “Types of Nonfiction Prose”, “Persona”, “Style and Sentences”. (There are only two resources listed under “Persona”: the author’s 2010 book and a 1969 volume by Walker Gibson.)

The copy I read was from the library and scattered throughout were short streams of ink, in various colours, as though each reader had a pen in hand while reading, occasionally using it as a bookmark and sometimes accidentally drawing the end of the pen across the paper while turning a page.

This is the kind of work that inspires you to keep your pen in hand, partly because the chapters are short (so the time between exercises is short) and  partly because so much of it feels as though it’s worth writing down.

This is the book I was looking for when I ended up with Julia Cameron’s The Artist’s Way (even though I wouldn’t’ve recognized it at the time).

So, keep your pen in hand, this is great stuff for non-fiction writers!

Klaus, Carl H. A Self Made of Words: Crafting a Distinctive Persona in Nonfiction Writing. Iowa City: The University of Iowa Press, 2013.