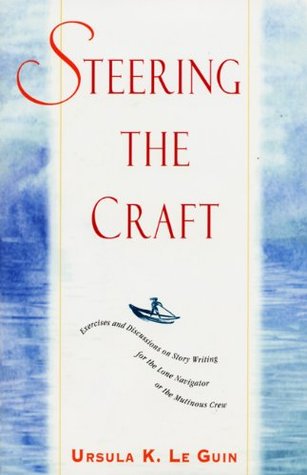 Beyond the reverent-but-not-too-reverent tone of Le Guin’s Steering the Craft, something else that sets this volume apart is the combination of specific advice and the suggestions offered for wider reflection on the issues she considers. The segment which most impressed me and which urged me to procure a copy for myself, was the section on POV and Voice, and it cleared up some confusion for me at the time and serves as a succinct refresher even now.

Le Guin’s text is clean and tidy; the book is relatively short (under 200 pages) but the topics she considers are presented in a most useful manner; this section is one of the longer ones because she claims it is the issue that most frequently challenges her students and other young writers.

In the 22 pages that comprise this chapter, she describes five principal points of view, gives very short creative examples, provides longer literary examples, suggests specific exercises which involve writing short pieces (from 250 to a maximum of 1,000 words), and offers recommendations for longer readings in each POV. Certainly entire books could be devoted to consideration of even one of these points of view, but this chapter covers the bases and offers a terrific balance of content and encouragement to pursue additional resources.

And now I must say something about Le Guin’s reading recommendations. Because I read obsessively, such lists and suggestions are often my favourite part of books for writers, and those in Steering the Craft stand out.

Yes, they include the classic writers whose work you’d expect to see referenced; if you read a lot in this area you become accustomed to the mentions of Chekhov, Tolstoy, Woolf, and Proust. You’re not surprised by discussion of works by García Márquez, Twain, Hardy and Dickens.

But what you don’t see as often are references to Margaret Atwood, Leslie Marmon Silko, Linda Hogan, Esmeralda Santiago, Vonda McIntyre and J.R.R. Tolkien. Le Guin looks at the work of writers whose work is often overlooked and encourages her readers to look at it themselves.

Good stuff for writers (and readers).