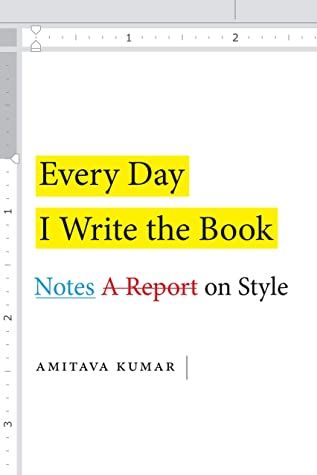 It’s simple, this volume’s cover, and I love it—the horizontal and vertical rulers of a typical word processing page visible on two sides, the title highlighted in yellow, followed by a subtitle with underlining and a strike-through (Notes A Report on Style). This is a process, it says. And Amitava Kumar invites reader into that process.

The publisher’s copy suggests that this book is, for academics, what Annie Dillard’s The Writing Life is for creative writers. Mentioning Dillard (and Stephen King) is sure to catch my interest, but Kumar’s book is neither as ruminative as Dillard’s nor as instructive as King’s: Kumar’s book is curious and provocative, serious in one moment and silly in the next.

One reason that I appreciate Kumar’s approach is his fondness for books about writing. Not all writers like to read about writing; even among that group, however, are writers who have been compelled to write about writing (perhaps nudged in that direction by an agent, publisher, employer, or a dwindling bank account). Some of the books I’ve written about here could have been written reluctantly too. Kumar’s not in that club.

Within a few pages, in a short piece titled “Running”, he writes: “There is a book of interviews with nonfiction writers—most of them would be described as journalists with a literary calling—that I consult often for what it has to offer in terms of advice about how to write a first paragraph, tips on organizing materials or interviewing, and advice on how to conduct research.” [He’s talking about The New Journalism, edited by Robert S. Boynton, and it pops up later in the volume on other occasions, too.]

I often revisit writing books when I am feeling stuck or unmotivated too, when I need assistance unravelling a snag in my routine. Amitava Kumar’s book, though, is one that I would pick up again to browse, or to reread. It’s not a reference book for me, although the two pages titled “Strunk and White” could refresh my thoughts on clarity. It’s more companionship for me, the kind of book I’d pick up to remind myself that some other people’s minds work in these strange, spirally patterns too.

Kumar is open to new ideas. (“A colleague of mine said that I should try the Pomodoro Technique,” he writes in “Kitchen Timer”.) He also returns to tried-and-true techniques: “I am in favor of naps,” he writes in “Sleep”. And in “Rules of Writing” he considers the kind of writing book he’d like to write:

“This book is about what works in writing and what doesn’t. It belongs to the genre of books by writers on writing. I love reading interviews with writers, particularly when they describe their work routines. I don’t want a lecture about the long lonely slog that resulted in a book; a small, useful tip will do just fine, thank you.”

There are many excerpts from the kinds of interviews he describes enjoying, scattered throughout these essays. In “Creative Writing”, he quotes Colson Whitehead: “Well, just because you are a good critic, it doesn’t mean you’re a god writer. They are two different skills—and it is great when a good critic is also a good critic [sic] but your average person might not be gifted in both areas.”

In the same essay, he describes having read Max Porter’s Grief is the Thing with Feathers recently, and he observes that “Porter’s book is marketed as a novel—and it is that, but is also a poem, a dream or hallucination, and an act of creative criticism”. It’s as though Kumar is in a constant, ongoing conversation with all the stories: I can relate to that.

He also writes from the perspective of a teacher, however; he first notes that Claudia Rankine’s Citizen (a multimedia volume of poetry) lists the names of Black men and women who have been killed in acts of police violence. He has incorporated this work in his teaching over the years, so that now he can also add that later editions of Citizen have different, longer lists—“In Memory of”. Experience adds another layer to these observations.

One of my favourite quotations, which Kumar cites in “Revising”, is from an interview with Jon Krakauer: “Writers often fail to appreciate that removing 5 percent of a book can make that book twice as good.” It’s something that he aims to keep in mind when he’s revising. It’s something that anyone revising would welcome hearing. It comes from a volume that Kumar refers to often, that New Journalism collection mentioned above. For some writer out there, Kumar’s book could be that kind of reliable source, constant companion.