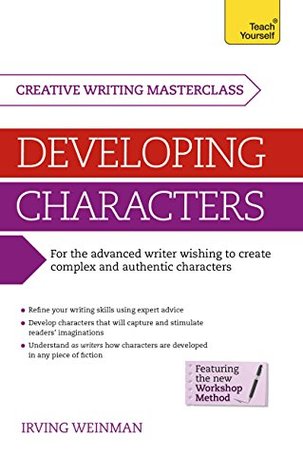 This book is designed to mimic a traditional masterclass in which a student’s shared piece of writing is distributed among classmates and critiqued by the master (with some feedback from other students as well).

There are eight chapters which consider sources of character, flat characters and round ones (yes, Forster still counts), narration, action, dialogue, symbolism and satire, and, finally, voice and turning point.

Following each chapter, there is a workshop assignment, which includes a series of questions, which one is to imagine are questions from the teacher and the rest of the class. (This doesn’t bother me one bit: fiction writers make up people all the time, so why not have a bunch of them sit with you in an imaginary class.)

The only element of the book which rings false for me is the iconology; symbols marking short and long exercises (camera, for ‘snapshot’ and pencil, for ‘write’), editing work (scissors, for reworking), key ideas (key!), and central messages (magnifying glass). All the elements are in place, but the iconology feels like an overlay (but who among the overly wordy doesn’t appreciate an occasional graphic).

Illustrative quotations are sometimes lengthy (which is fine, as there is a list of resources for each chapter but not everyone will have these works readily available) – a couple of pages – and italicized. (The use of italics is one of the pet peeves Benjamin Dreyer discusses and it niggles me too, although I do understand the desire to set apart the examples from the text proper.)

The works selected for study are classic and contemporary, with the majority drawn from works by American and English writers (some women, a few writers of colour, an occasional short story and translation). Beginning with Thomas Hardy’s The Return of the Native and ending with Richard Ford’s Independence Day, the representation is not expansive, although the consideration of Iain Banks’s novel The Quarry, with its autistic character, 18-year-old Kit, is welcome.

Although the work is designed with advanced writers in mind, the recommended resources would suit serious-but-not-particularly-advanced readers. Nonetheless, although works like the Graywolf series are more interesting in the attention paid to lesser-known writers (like Barbara Comyns Dezsö Kosztolányi in Maud Casey’s volume, for example), the advantage of these well-known authors is that they would be recognizable to students who might be using this volume in conjunction with other college and university texts which could contain the complete narratives.

The workshop questions balance specifics and generalizations and invite writers to query the manuscript (and themselves) and explore possibilities.

For instance, consider this single bullet-point in the workshop about action: “Action has nearly no limits in type. Do certain types of action tend to dominate the example of action in your writing? What are they? (This chapter has given some examples, but has had to leave out many important types, for example, actions connected with eating and lovemaking.) Do you think your fiction could improve if you ventured out of your ‘favourite’ areas of action?”

This work would be particularly valuable for a writer who seeks to address a noted failing in characterization (e.g. in a complete work with an identified weakness, which has been rewritten previously) and who is looking for a new way to engage.