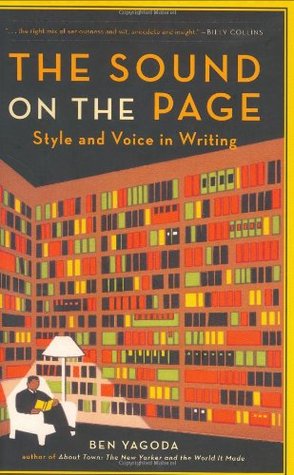 To begin with a cliché, which of course Ben Yagoda would never do, it’s not what you say, it’s how you say it. That’s style. And that’s at the core of Ben Yagoda’s The Sound on the Page.

Accepting as his premise, “style matters”, Ben Yagoda went on to interview more than 40 writers.

He quickly discovered that it wasn’t an easy subject to discuss overtly. Some writers approach style consciously, others subconsciously, and even those who do approach it deliberately had difficulty assembling their explanations.

“The underlying movement is a circling around the subject, until finally it is securely roped and tied to the ground.”

From whether one prefers writing longhand to writings on a keyboard, from literary influences to Strunk and White, from writing in Black English to the overuse of adverbs: it’s all here.

The author declares that it’s not a how-to guide, but nonetheless every page has  “implications for writers who are interested in discovering and developing their own style”.

And these pages are best absorbed over time. The narrative contains long excerpts of the interviews, and some chapters are comprised entirely of writers’ thoughts on style.

This is not a work with the conversational style of Anne Lamott’s Bird by Bird, or the intimate tone of bell hooks’ remembered rapture; The Sound on the Page feels formal, methodical and s-e-r-i-o-u-s.

“To be sure, most of us neither can be nor want to be a Hemingway. But all of us have within us a quieters sort of stylistic distinctiveness. Anyone who is serious about writing in any form is engaged in a lifelong waltz with this capability.”

“Thinking about voice, my first thought was that it’s about identity, recognizability, individuation. But then I thought, no, recognizabilty is not the point, it’s the result — of emotion, movement, kinetic thought, dance, fear, love. It’s the result of specific experience filtered through a specific sieve.” Sharon Olds

“If you’re a lens with a particular grind, with warps and bumps, the writers you like are lights that can shine through that lens. Different lights are going to reveal different aspects. You end up with a map of your own lens — the things that come up again and again.” Michael Chabon

Yagoda, Ben The Sound on the Page: Style and Voice in Writing (HarperResource – HarperCollins, 2004)