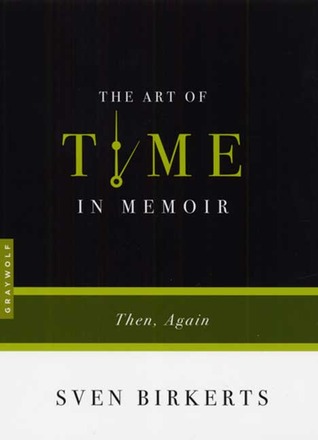 You’ve probably already heard me say how much I enjoy Graywolf’s series on creative writing.

If you aren’t famililar? You should check the Art of series out, here.

They’re terrific. (They’re much more valuable for me than the Writer’s Digest series, although I do understand why those appeal to other writers.)

At least that’s how it seems. Reading through (and in between) the lines. (Though, admittedly, I usually come to the writers who pen these works without having known them in another context.)

The Art of Time in Memoir is no exception. Sven Birkerts early on discusses Marcel Proust’s The Remembrance of Things Past, suggesting that it, of all novels, is the closest to memoir in form.

Birkerts states that Proust mined his life in a thousand ways and applies the memoirist’s sense “of the true scales of mattering”. This pushes the boundaries of the novel, and it means that a relatively minor character could receive more attention in the prose than Marcel’s father.

As a reader with considerably more experience reading fiction than reading memoir, I was relieved to be drawn into the subject through relatively familiar territory. And Sven Birkerts made me all the more comfortable by referring to other familiar works, like Annie Dillard’s An American Childhood and Virginia Woolf’s “A Sketch of the Past”.

Memoirists, he explains, look to their work to discover the way in which various events in their lives make a different kind of sense over time, as the years pass. Dillard finds continuity among change, an underlying self among the versions of self that growing up requires. Woolf theorizes that certain incidents and perceptions from the past act as shocks to the system demanding reflection.

These are big ideas in a slim volume. I’m really only hinting at it here, and I’m leaving out the majority of the references he makes, but it’s all good.

(And here’s a quote: “The writer must represent as faithfully as possible what memory has shaped inside — memory and feeling.”)