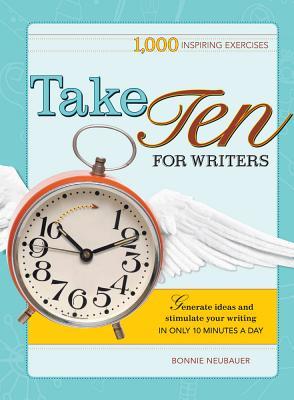 So you might remember that I have a bad attitude about Writer’s Digest Books, but this is a second exception to my rule.

If there are many more of these (see “taking that back” here, too), I may have to revise aforementioned attitude. [Note: this was the beginning of a trend.]

In the introduction to Take Ten for Writers, Bonnie Neubauer states that “if you are not putting pen to paper, you are at rest”, and she proceeds to explain the set-up of the book, which is designed to start the flow of creative energy, get the momentum going.

She also includes five rules, but begins by clearly stating that they’re there for those who like rules, and there to rebel against for those who don’t. Ha!

But let’s get down to the math. The book has 100 exercises, each appearing on the odd-numbered page.

After you read through the page, you are to choose a number between one to ten, which will correspond to the variation (one of ten choices) on the flip-side of the page.

So that’s how you end up with one thousand exercises. (See, she even makes math accessible.)

Some of the exercises’ variations are more varied than others. For instance, the one which gets you to continue a story begun on the first page by adopting the voice of a food in the fridge. Well, that one just didn’t sit well with me and, anyway, the scope of the exercise is relatively limited compared to others.

But, for another example, take being asked to make a selection from 1 to 31 and use the word that appears beside the figure you’ve chosen to launch a freewrite. Next,  choose another number between 32 and 62 (the idea being that you can use the date and double it, if you’re not random-minded). Then you are to write a second freewrite that begins with the word next to your second number, a freewrite which is connected to the first in some way.

Well, you can see how that kind of open-ended set-up could hold months worth of writing. (But, yes, that math was hard. S’why I’m in the letters game.)

Regardless of the scope of the exercises, however, the book’s design is also worth mentioning. Each page has its own style (with a slim border around each contributing to a sense of continuity) and contains contrasting and striking colour usage and also a wide variety of supporting media. The presentation alone stimulates the creative juices.

For me, the kind of prompts in Take Ten for Writers are of a different sort than those included in Elizabeth Berg’s Escaping into the Open (which I’ll chat about in a few weeks), which are more open-ended.

Neubauer’s is not a book that I would turn to when I’m sitting down in the morning to write but can’t easily pick up the threads of the manuscript I’m working on; when I’m living with a book or story but can’t get into the right space to move ahead with it, a looser kind of prompt can be easily adapted to suit what I’m working on, and it’s like a tool with a purpose.

Bonnie Neubauer’s prompts are the sort that I would turn to when I`m not focussing on a specific project, when I want to get my head out of what I’ve been working on, or when I don’t have something on the go.

They are the kind of prompts that can work into something new for me. It’s like deciding that you want to exercise but you don’t want to do the usual pilates or aerobic routine, so you decide to go dancing instead.