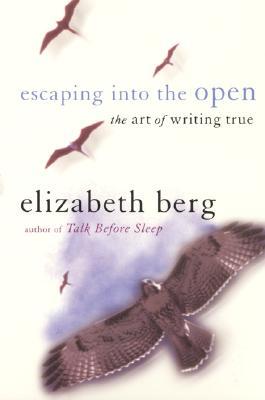 The first time I read Escaping into the Open, I had a day job working for a couple who understood that I would work my butt off for them, but that I wanted, more than anything to not be working for them, to be writing full-time.

He was a liberal-minded sort, and she was a reader (we both loved Elizabeth Berg’s trilogy which began with Durable Goods); over the years in which I worked for them, they allowed me to reduce and increase the number of shifts I worked, to allow for more time with drafts and less time with a cash register, and they celebrated with me when Room published a short piece set in their shop.

This time, rather than read the book on my lunches and breaks, I was reading it in the afternoons, sitting outside in a summer which was the launch of a full-time writing stint, almost ten years after my first reading of it.

I haven’t read an Elizabeth Berg novel in almost that many years, but I picked up Escaping into the Open because I remembered the writing prompts being good. And they are.

They straddle the line of being accessible without being too basic, and also sparking creativity without pushing it to the limit.

They’re like warm-up exercises for me, when I know that I want to work on something in particular, but I can’t shift into it. (As opposed to not having a project in mind, and wanting to jolt something out of me, which requires a different kind of prompt: see chatter about Take Ten for Writers by Bonnie Neubauer.)

Here are some examples of Elizabeth Berg’s prompts:

Describe taking a walk in winter using sounds only. (Especially fun doing this in June)

What used to live under your bed. (For a non-winter-inspired prompt.)

Name three things an ear looks like. (Really, most of them are not winter-ish.)

As for the prose, which comprises the bulk of Escaping into the Open, it’s a comfortable read for the most part. The emphasis is on finding your own voice, and she embraces the idea that different people write for different reasons.

“The more you write the way you want to (the way something at your center is telling you to), the better the writing will be.”

She really does put the emphasis on the writer as individual.

“We need the chance to draw from our own unique selves, to act according to our own beliefs, without any interference from others. I believe that solitude, perhaps more than anything, breeds creativity, breeds originality.”

And, for the most part, she is not restrictive about her approach. She affords the reader an opportunity to recognize him- or herself in her prose.

“As a writer, you should have a sticky soul; the act of continually taking things in should be as much a part of you as your hair color.”

It’s easy to find yourself in statements like this, to feel included in the circle that Elizabeth Berg is drawing with her work.

And, yet, I do have a quibble. In discussing all the things a writer should have, in saying that most of them cost nothing, she overlooks the fact that many of them rely upon one of the elements in her list which certainly does have a cost, but not one a wanna-be-writer can save up for: Prosperity.

Sure, you can make up a Purpose and a Plan (the first two items on her list), but being able to actualize those things depends upon opportunity.

“It will require some sort of sacrifice at first, but if you’re meant to be (or in fact already are) a writer, you’ll find a way to do it.”

It sounds like one of those things that someone who has-never-had-to-do-without would say. Someone who has never had to take a day job where their employers seemed hardly human, where despair filled the spot that used to hold the art of writing.

I didn’t always have understanding and supportive employers; had I read this when I was holding another job, when I was too busy hating myself on weekends and in the evenings for not writing, I would have felt Elizabeth Berg’s statement keenly and likely set aside her book. (And set aside the idea of writing perhaps, too.) But I know that’s my bias showing.

(And, yes, I admit, that would have meant missing out on her Food for (Creative) Thought chapter, which does include some terrific recipes, including one for Wickedly Delicious Chocolate Cake, which I felt the need to make upon finishing this re-read earlier this summer.)

Overall, Elizabeth Berg’s Escaping into the Open is Good Stuff for Writers.

Elizabeth Berg’s Escaping into the Open: The Art of Writing True (1999) HarperCollins, 2000