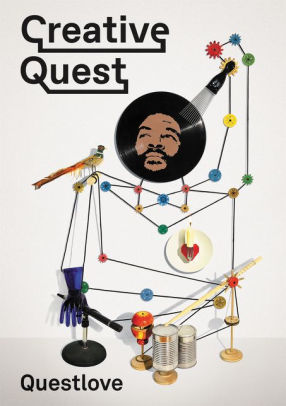 Ahmir Khalib Thompson, known as Questlove, is an American drummer, DJ, music journalist and record producer. You might recognize him as the drummer and front man (with Black Thought) of The Roots, or maybe from The Tonight Show with Jimmy Fallon.

In Creative Quest, he contemplates and draws inspiration from across the musical landscape but he also refers to other artforms along the way. Like Willy Wonka and the Chocolate Factory, in which Willy Wonka’s attempt to make three-course-dinner chewing gum unexpectedly transforms Violet, to illustrate how a creative exercise can take unexpected turns.

He also discusses his interest in chefs as creative professionals. (Like Barbara Ueland, his understanding of creativity is inclusive—a variety of endeavors suits his definition.) Regarding cooking as a creative act, he is intrigued as much by the differences between it and his own creative work as by the similarities: “The biggest difference, obviously, is in the relationship with their audience. Musicians have audiences making demands on them, but not in the pure sense.”

Although his literary references appear scant (he’s not referring to the Roald Dahl novel when he thinks about Violet’s unfortunate condition, but the 1997 film directed by Mel Stuart), he does consider French journalist Jean-Dominique Bauby’s The Diving Bell and the Butterfly (the inspiration being, again, the film directed by Julian Schnabel in 2007, rather than 1997’s Le Scaphandre et le Papillon). He chooses this story, about how Bauby adapted to life after a stroke in his early forties left him trapped in his body, to illustrate how a dramatic departure from your own life can have unexpected and creative consequences.

Questlove freely discusses how important other artists’ work has been to him creatively. He’s generous in acknowledging a debt to their work: “We take our ideas where we find them, and largely we find them in the works of other artists.” And he’s gracious towards his mentors. (Fans who are more interested in the biographical aspects of this work will find these chapters particularly valuable.)

His observations about mentorship do have a broad applicability. It’s refreshing to hear how his understanding of certain concepts has changed over time. Though he’d expected mentorship to be “more about teaching skills, refining them, identifying what’s there and what’s not there”, he discovered that it was more about the importance of making the process a “two-way street, like everyone was inspiring everyone”.

Creative Quest is primarily focused on positive experiences and encouraging suggestions, but there is a no-nonsense acknowledgement of the varied experiences that an artist will have. For instance: “Much of what you do creatively will not land in the middle of a receptive audience. It will just fall into the world, to be ignored by most people and found by a few who react strongly to it, either positively or negatively.”

There is also some discussion about the need for conviction and self-awareness when an artist engages with social media. An overarching concern for Questlove is authenticity. In engaging with a broader community, he has simple advice: “Learn how to present yourself to others, but not to present yourself at the expense of truth.”

This concern with authenticity is evident throughout the volume. For instance, in a discussion of his personal experiences with epiphany, he does discuss some creative breakthroughs and successes, but not in a bold-or-italicized-text kind of way. Instead, he acknowledges that adopting that kind of nomenclature is not always appropriate: “It’s hard to pinpoint an epiphany, and it always seems artificial from the outside”

The volume is text-heavy but his tone is accessible and inviting. Even without a familiarity with his creative work, I was consistently drawn to the next chapter, and the book’s conclusion is simple but remarkably satisfying:

“When you’re done here, don’t just close the cover and let the world return to the way it was before. Make things. Make your way to the things that others have made. Make theories of yourself. All the advice in the world won’t help if you don’t get out ther and start the perfectly imperfect process of creating.”