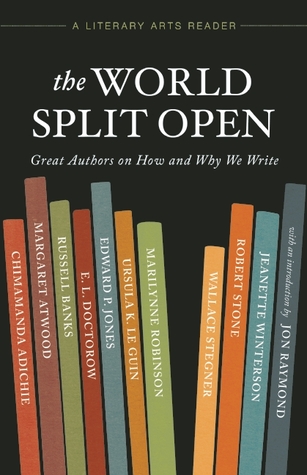 One of those writers was Ursula K. Le Guin, who has an essay included in this volume: “Where Do You Get Your Ideas From?” The essay dates to 2000 but the content is still relevant today.

Some of it is standard: “Where do you get your ideas? From books, of course, from other people’s books. If I didn’t read, how could I write?”

Occasionally she pushes the envelope, playing both sides of an observation designed to provoke a response: “I am a human; therefore I lie. All humans are liars; that is true – you must believe me.”

This focus on truth-telling feels particularly salient now, with the current American government administration leading the United States into a “post-truth era”. But, then, I am drawn to Le Guin’s writing about writing; earlier this year, I considered her essay on writing at Hedgebrook and a few years ago I wrote about Steering the Craft (a longtime favourite writing resource) as well as The Wave in the Mind.

Perhaps it’s unsurprising that I noted more passages from this essay than the others; yet, the shortest section in my notes for this collection corresponds to the essay by Margaret Atwood, from 1994: “Spotty-Handed Villainesses: Problems of Female Bad Behavior in the Creation of Literature”.

This surprises me: having returned to Margaret Atwood’s Negotiating with the Dead: A Writer on Writing several times, I would have expected to find more notable passages in this piece, but it is of greater interest to the reader in me than to the writer in me.

With as few notations as Atwood’s essay, Marilynne Robinson’s “On ‘Beauty’” (2006) urged this note in my file: “Fiction is narrative freed from the standard of literal truth. In effect, it is the mind exploring itself, its impulse to create hypothetical cause and consequence.”

So, it would seem there is a theme here. One which carries into the next piece, Wallace Stegner’s 1990 work “Fiction to Make Sense of Life”. (This was a potentially aggravating read, for it reveals the endings of some classic short stories and to illustrate the changing taste of readers, who are now less amused by resolutions with a twist.

In fact, however, the pieces in this anthology are a satisfying mix of concrete advice and musings upon the bigger issues (like the social and cultural responsibility of a writer, Aristotelian unities, and Rupert Sheldrake’s “morphic resonance – and you can turn to Robert Stone, Russell Banks and Jeanette Winterson if that trio calls to you).

Many of the contributors comment on the importance of reading in the development of a writer’s craft and both Zadie Smith, in “305 Marguerite Cartright Avenue” (2012), and E.L. Doctorow, in “Childhood of a Writer” (1991), speak about the fundamental importance of reading and libraries in helping them to discover their voices as storytellers.

This was also true for Edward P. Jones, who states in “Finding the Known World”: “The reading was simply a means to building a novel. I had a goal – that of writing the novel – and to get there I had to go through this forest of reading.” (He, too, has an observation which fits with the initial theme I addressed above: “The facts and the truth of a world are what I make up.”)

These pieces are pulled from across two decades, from some authors who are no longer writing and others who remain fervently active, and are accessible to emerging and developing writers while still offering inspiration and focus to more experienced wordsmiths. But if you don’t want to know how William Faulkner’s “A Rose for Emily” ends? Steer clear of Stegner’s piece.

Literary Arts’ The World Split Open: Great Authors on How and Why We Write
Portland, OR: Tin House Books, 2014