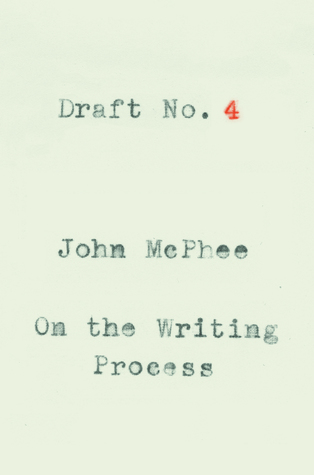 If you’re a “New Yorker” fan, you probably already know what I’m going to say: John McPhee is a renowned non-fiction writer, nominated four times for the Pulitzer Prize (winning in 1999), who has been associated with the magazine since 1963.

There is a lot of detail in Draft No. 4 about essays and books he has authored, about his process and his craft, and those readers who are already familiar with his career will undoubtedly find that these references are both pleasurable and informative.

For those of us coming to Draft No. 4 as a writing tool, the anecdotes and examples feel like a constant reminder of what remains unread (or, maybe that’s just me and the chronic sense of never-having-read-enough), although his observations about the changes in process across a half-century-long writing career, simply from a technical perspective, remain fully accessible.

For instance, a discussion of how a writer’s use of a tape recorder can influence the interview process is not directly applicable, now that technology is ubiquitous, but it is still worth reflecting on how a subject’s overt awareness of the process can alter their receptivity and change how much or little might be disclosed if the process overwhelms their connection with the interviewer.

McPhee’s experience in a low-fi environment certainly influences his approach to the craft today. “Cumbersome aspects there may have been, but the scissors, the slivers, the manila folders, the three-by-five cards, and the Underwood 5 were my principal tools until 1984,” he writes.

A dozen pages later, he offers this advice: “Another way to prime the pump is to write by hand. Keep a legal pad, or something like one, and when you are stuck dead at any time – blocked to paralysis by an inability to set one word upon another – get away from the computer, lie down somewhere with pencil and pad, and think it over.” (This works for me, but I grew up pounding on a typewriter too.)

The book is divided into eight parts: Progression, Structure, Editors & Publisher, Elicitation, Frame of Reference, Checkpoints, Draft No. 4, and Omission. I made notes from each section and particularly enjoyed the anecdotes and advice about fact-checking (perhaps because I felt a little less pressure to make notes, being more of a make-it-up writer, so I didn’t pay such close attention).

He writes in a matter-of-fact tone. “When am I done? I just know. I’m lucky that way. What I know is that I can’t do any better; someone else might do better, but that’s all I can do; so I call it done.” There is no silver-bullet solution here, but the simple statement is true and the humour comes through.

I especially appreciate his comment on competition between writers: “No one will ever write in just the way that you do, or in just the way that anyone else does. Because of this fact, there is no real competition between writers. What appears to be competition is actually nothing more than jealousy and gossip. Writing is a matter strictly of developing oneself. You compete only with yourself. You develop yourself by writing.”

On these issues, the straightforward tone is essential and powerful. Perhaps less so in more general observations: “For nonfiction projects, ideas are everywhere. They just go by in a ceaseless stream.” Then again, that’s true too.

As one who has long appreciated Anne Lamott’s shitty-first-draft directive, I also appreciated this classier way of describing the same process (and his of words like ‘nucleus’ and ‘interstitial’ elevates it even more):

“Blurt out, heave out, babble out something – anything – as a first draft. With that, you have achieved a sort of nucleus. Then, as you work it over and alter it, you begin to shape sentences that score higher with the ear and eye. Edit it again – top to bottom. The chances are that about now you’ll be seeing something that you are sort of eager for others to see. And all that takes time. What I have left out is the interstitial time. You finish that first awful blurting, and then you put the thing aside.”

I’ve always called it simmering, and I’ve read other descriptions of it, but McPhee’s rings true for me. It’s not just putting the manuscript away in a drawer: somehow ‘interstitial’ captures a little of the magic I feel there, too.

Great stuff for John McPhee fans and really good stuff for other writers too.