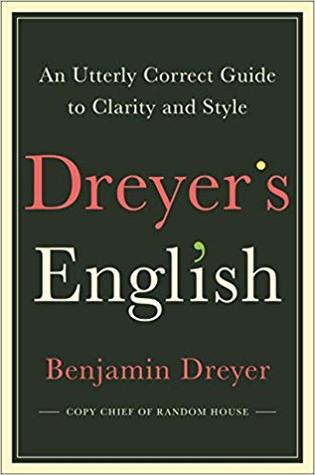 He’s not the first. Karen Elizabeth Gordon did it. So did Lynn Truss. And, now, Benjamin Dreyer. He’s made it funny, this writing thing.

Sometimes it’s a subtle playful undertone. Parenthetical remarks, like whispered asides to the reader. Like: “(If you want to puzzle your reader, that’s your own business.)”

Occasionally it’s a matter of snickering. Which often relies as much on the reader as what appears on the page. How many copyeditors and copywriters have been asked what makes them experts. Every single one of them, I’m guessing. And Dreyer is willing to poke fun at himself as an expert too. He often contradicts his own advice and points to his own subjective and baseless decisions: for instance, near the beginning of the book he issues that parenthetical remark above, and midway through he contemplates the necessity of parenthetical remarks. So, go ahead, snicker.

Do not use quotation marks after the term “so-called.” For instance, I’m not

a so-called “expert” in matters copyeditorial

Every now and then, there’s some chortling. Say, after a passage like this one:

If you turn to p. 719 in your Merriam-Webster’s Collegiate Dictionary, eleventh edition, you will find, one atop the other:

Which tells you pretty much everything you want to know about the use of hyphens, which is to say: It doesn’t make much sense, does it.”

Maybe even a snorty laugh in the mix, in response to such a note as this: “We won’t discuss the use of ?! or !? because you’d never do that.”

Perhaps a snorty chortle or two. For instance, during the discussion of British spellings, like ‘labour’ and ‘harbour’: “I will confess that I do like the looks of the Brit. ‘armour’ rather than our ‘armor’ – the u seems to add a bit of extra metallic clankiness – but one must follow the rules.”

And sometimes an out-and-out laugh erupts.

As, for instance and strictly speaking, you might do here, in quoting this piece of text I 100 percent made up out of thin air and didn’t find on, say, Twitter:

Their [sic] was no Collusion [sic] and there was no Obstruction [sic].

Which, however, only reminds us that there is a serious undertone to everything, and that is true here, too.

“And that’s often the problem, isn’t it? In writing and in so many things: that we accept things we’re taught without thinking about them at all.”

Benjamin Dreyer takes writing so seriously that he knows how to laugh with it, not at it. And it’s a pleasure to have company in that pastime.

Very fine stuff for all sorts of writers.