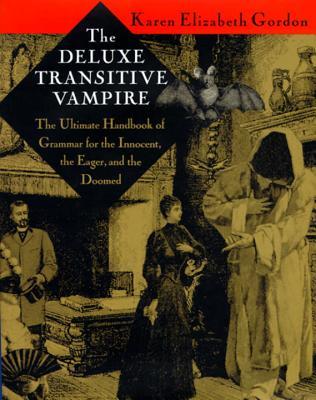 In the preface, Karen Elizabeth Gordon explains: “”I crawled beneath the lines of the previous version and found what had been left unsaid because of questions I hadn’t asked. The answers came in many voices, with me emerging somewhat battered and bruised from the adventure (and there are these curious marks on my throat), but that’s what it took to tear the terror from this terrain.”

If you truly find English grammar terrifying, this likely isn’t the book for you. But, if you are well-versed, and simply need a refresher, but find yourself wholly reluctant to start at the beginning of The Chicago Manual of Style and read straight through, The Deluxe Transitive Vampire manages to straddle the line between useful and amusing.

Its gothic flavour does not detract from its clarity. The introduction states: “Learning is less a curse than a distraction. If you nuzzle these pages with abandon, writing will lose its terror and your sentences their disarray.”

See, it covers the basics and you can’t help but grin at the examples for even the most straight-forward elements of the text.

As an example of a compound predicate, from the Words section: “The baby vampire hurled his bottle at his nanny and screamed for type O instead.”

As an example of prepositions, from the Words section: “Lisa shakily stood her ground with the obstreperous opposition of her puny will.”

Even something as elementary as a noun is more interesting in The Deluxe Transitive Vampire: “That’s the pure, simple beauty of the noun: utter the word, and you have company on your hands, however abstract (apathy, hypothesis, dissent), palpable (balsa wood, marzipan), or specific (the Loch Ness Monster, Elvis Presley, The Duino Elegies).”

However, the pleasure of the text does depend on the reader’s familiarity with the concepts herein. If you didn’t have at least a passing familiarity with past perfect participles, a sentence like this one might through you off course in her discussion of verbals:

“Having been seen to have seen the crime at the scene of it, the innocent onlooked feared the rat pack would hunt her down after the big Appenzeller heist.”

Nonetheless, how funny is this bit from the Agreements section: “The shade of sadness we call the blues can take a singular or plural verb, since anyone who has them can’t be bothered to look it up, or to be consistent about whether it is — or they are — in pieces or in a solid hopeless mass.”

And even if you’re not interested in the details, you have to grin at the fantastic illustrations, which often relate directly to the text. For instance, one of the simpler illustrations, a bat, appears on a page with this tidbit about agreement: “Often these issues are so easy and apparent that you scarcely bat an eye.”

Still, it’s not all gothic fun ‘n’ games, The Deluxe Transitive Vampire is a solid introductory handbook. It offers everything from definitions (e.g. “The verb is the heartthrob of a sentence.”) to useful tips and tricks (it is particularly tricky) like this one about distinguishing between participial phrases and gerunds: “If you’re confused in the presence of an -ing word, you can find out if it’s a gerund by making it submit to this simple test (no torturing the prisoner, please): Can it be preceded by an article or by a possessive form?”

If you’re looking to sharpen your skills, this reference book has teeth. The fun kind.

Karen Elizabeth Gordon’s The Deluxe Transitive Vampire: The Ultimate Handbook of Grammar for the Innocent, the Eager, and the Doomed (Pantheon Books, 1993)